I feel blessed to finally have some time tonight to reach out to everyone and say “hi”.  These past weeks have been ridiculously busy; mainly with work, but also with exploring, working out and being sick (boo).  As I sat at my kitchen table to write all you lovely people, I couldn’t decide what music to put on.  I just downloaded an album from Pink Martini, but “meh”.  I thought about my usual go-to, Mr. MRAZ….again…meh.  I just decided to just hit “ALL Songs” and let iTunes decide for me. The first song that popped up was a song by The Head and the Heart…a song I never really paid much attention to.  However, the chorus got my attention tonight:

Nothin’ is as it has been

And I guess it’s just as well

It couldn’t be more fitting because I really do miss everyone.  I am definitely loving the adventure, but I’ve mentioned before that the time difference makes staying in touch much more difficult.  I am sooooo appreciating the comments, emails and pictures.  They seriously make my day when I receive them so keep it up!

Last weekend I was feeling those “heavy boots” again and for the longest time I couldn’t figure out why.  Life is good….I’m meeting new people, my job is challenging in a very good way, my apartment is coming along (slowly, but surely) and I have been exploring and enjoying every moment.  The humidity sucks sweaty balls (literally for many), but that has been the worst part (oh, and the mosquitoes…nasty little fuckers)…and it is only temporary as fall is coming soon, yet something just kept tugging at me.  My thoughts drifted to visions of driving over the bridge each day, taking Rufus to the park, and my cottage on Ivy (sitting in the backyard with a glass of wine and shooting the shit with some of my favorite people) and a sense of true nostalgia swept over me.  Then I noticed this on my nightstand:

I found it in one of my bags that I finally cleaned out.  My keyring.  It had actually been sitting on my nightstand for a few days; one of those items that I’m not quite sure where to put because I have no use for it anymore.  At first it may seem insignificant; like it did for me, but then the poignancy really hit me.  My keychains have changed several times over the years and the keys have changed too, but probably not as often (well maybe for me…I’ve moved a lot).  We ALWAYS have our keys on us, or at least close by; to lock our doors when we leave our homes, unlock our cars, start our cars, enter our classrooms/offices, get back into our cars and get back home.  That’s multiple times a day for YEARS! Yet now, I have no use for them.  I do not own a car and my apartment is a keyless entry.  I have no use for something that I have kept with me literally every day for my entire adult life. How WEIRD!  It represents how much my life has changed yet it is already my “normal”.  For the first couple of weeks, every time I left my apartment I would literally stand with my door open and have to mentally tell myself that I didn’t need my keys before I could close the door.  I don’t think twice about it anymore.  My life is my normal, but just three months ago it was completely different.

Which brings me to another topic I’ve been meaning to mention; the name of my blog. “A Beautiful Mess” is the title of a Jason Mraz song near and dear to my heart for several reasons.  More than that though, it describes Life.  Life is beautiful, yet it is so messy…unpredictable; throwing curve balls one minute then lucky lottery tickets the next.  It took me some time to see the chaos of it as beautiful and, like so many others, I dwelled on the unfairness of it, the lack of regard to what I want and how I think it should go….infuriating!  Life is out of our control and once we allow ourselves to just let go it’s so much easier to see the beauty in the ugly.  Letting go is the hard part though and I don’t know if it’s even possible to completely ride hands free.  I’m working on it and I’ll let you know.

Onto life in Japan…

I made a deal with myself to explore each weekend and try something new.  So far so good even though I was sick as a dog this last weekend.  It wasn’t too far of a trek and I’m glad I went and didn’t spew anywhere. Throughout Japan there are Shrine Sales; the Japanese version of a flea market…the difference being that they are held on the grounds of a Japanese shrine (hence the name). This particular one in Takahatofudo was on beautiful grounds with hiking trails throughout the surrounding hills…the scenery was breathtaking.  What is truly astounding is that it was only a block from the train station; these incredible sights are simply smack dab in the middle of Japan’s sprawling neighborhoods and you would literally think you are in the middle of nowhere once you enter these areas.  Japanese do nature very well considering the limited space they have to work with.  Antique porcelain, kimono, pottery, jewelry, woodwork, art and other antiques were among the many treasures waiting to be taken home by the wistful shoppers.   I found myself choosing a couple of obi hangers at the booth of an adorable little man from Thailand.  He spoke English, but I accidentally said “si” instead of ”hai” and he told me he spent a few months in Mexico.  From then on we spoke Spanish instead of English!  Who would have thought I’d get to use my Spanish skills in Japan?  Hands down the coolest part of the entire experience was the chanting of the monks from within the shrine itself.  That was amazing.

Banner for newborn son. It’s a god protecting the infant from a demon. 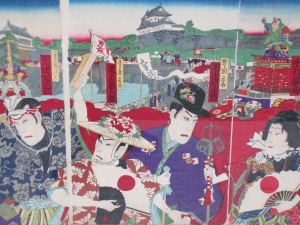 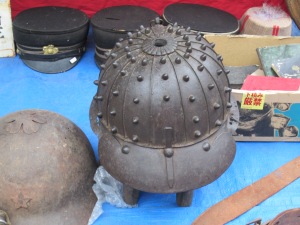 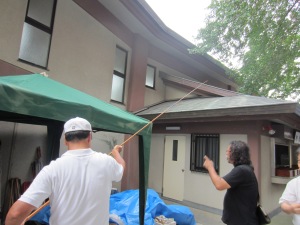 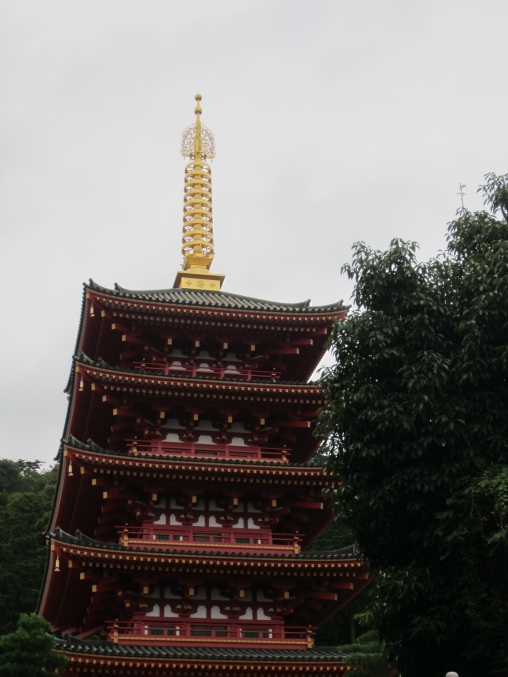 Stairway leads up to the hiking trails

The weekend before I was invited to attend a Togoshi Hachiman Festival.  This is a street festival in which the neighborhood people carry a portable shrine through the streets to show their gratitude for their blessings; something that has been done since the Edo Period. It is an interesting tradition and one I do not quite understand, but I am glad I was able to experience it.  We walked with our “team” to the neighborhood’s actual shrine where it was blessed.  We then followed them back.  Those poor guys and gals were so hot and sweaty and the shrine was definitely not light.  One guy on the street watching with us told us his shoulders were bruised for weeks after he helped carry the shrine during a previous festival.  Check out the video.  The white guy and blonde girl are two teacher from ASIJ that volunteered to carry the shrine.  I’m glad I was in charge of video! 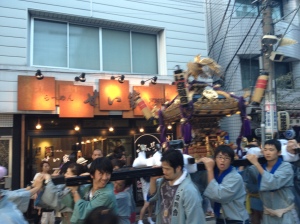 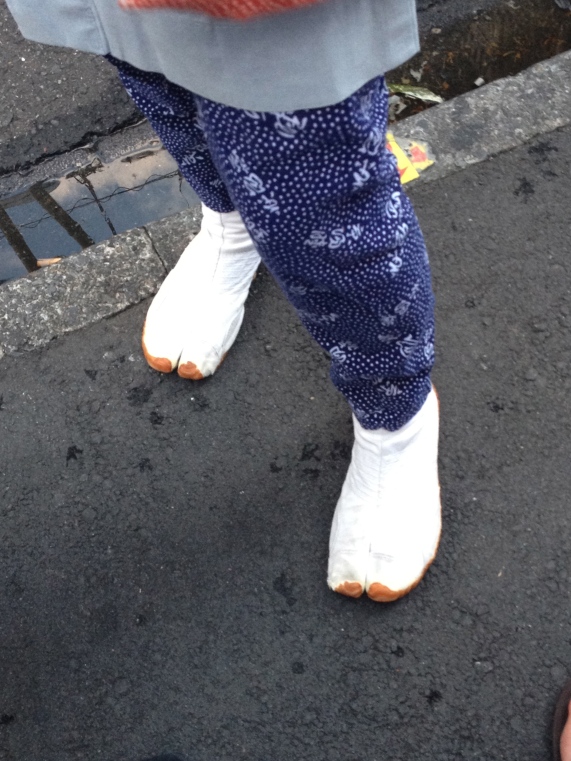 A fancy shrine that is housed at the actual shrine. This one only comes out once every three years 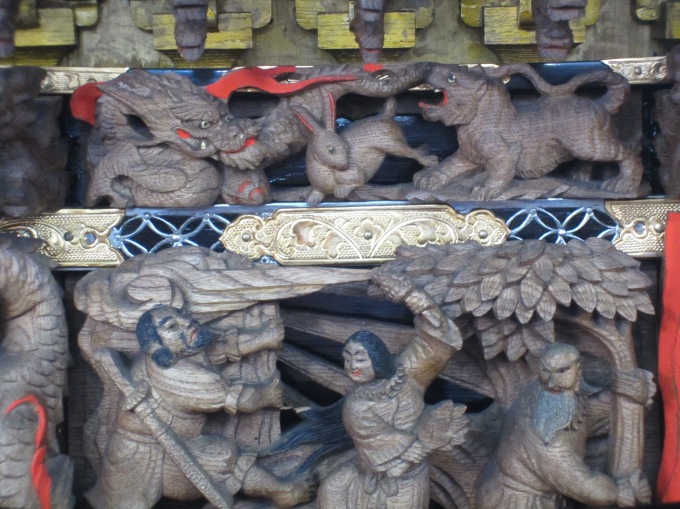 Some detailing on the portable shrine

This weekend I plan to go on a hike up Mt. Mitake.  It’s supposed to be quite beautiful, but then again most of what I have experienced so far has been.  I’ll be sure to update you.  Oh, and I think it is going to be my first excursion on my own so I will definitely tell you how that goes.  I’m predicting at least 6 hours…for a two hour hike (my compass is still broken).

I am obsessed with Japan’s skies.  Every day they are just beautiful!  The only caveat is that the views are so often obstructed with power lines.  Seriously.  I went up to the third floor of the middle school building this evening to take pictures of the striking hues of pinks and oranges, but I couldn’t get a shot in without an ugly black line striking through it.  Oh well.  Here are a few I’ve been able to capture.  How lucky I’ve been to live in places with the most amazing skies…Nevada, San Diego, and now Japan.

View from a friend’s rooftop terrace…yeah

The damn power lines I was talking about…they are terrible!

Life is good.  I can’t complain right now.  I miss everyone and definitely have my melancholy moments, but I feel your support every day and that is what has allowed me to do this.  So thank you…to all of you for your encouragement and love.

6 thoughts on “All part of the adventure…”